Today in this bog we will discuss about different layers of OSI model. This is the most important part of networking you will learn today. So, let us first start with what is OSI model?

OSI Model or open System Interconnection Model is defined or used to understand how data is transferred from one computer to another in a computer network. Communications between a computing device are divided into seven distinct abstraction layers in the OSI reference model: physical , data link, network , transport, session, presentation, and application.

In the most basic form two computers connected to each other through a LAN Cable and connectors sharing data with the help of Network interface card (NIC) forms a network but if one computer but one computer has Microsoft window and other has MAC OSI stored. How will these two commute with each other?

In order to make successful communication between computers or networks or different architectures 7 system or OSI model was introduce by International organization for standardization in 1984.

The seven layers of OSI model are given below: 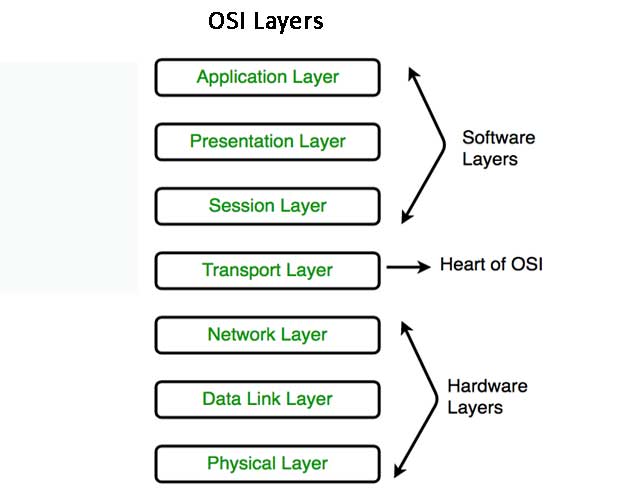 Note: Each layer is a package of protocol. These layers do not include applications if taken example of application layer rather it consist of protocols which are needed to make these applications like Chrome, Firefox etc.

Let’s briefly discuss about each layer of OSI Model.

For example conversion of ASCII into EBCDIC code.

This function of conversion is called translation. Before data is transmitted presentation layer reduces number of bits that are used to represent the original data, this bit reduction process is called data compression.

This can be lossy or lossless.

Data compression is used to reduce the space used to store the original file so that the reduced file can reach the destination in very less time. To maintain the intrigity of data before transcription the data is encrypted. So, protocol SSL (secure sockets layer) is used for encryption and decryption. Therefore, presentation layer perform three function i.e. translation, compression and encryption.

Read what is VPN? http://blog.uninets.com/what-is-virtual-private-network-vpn-descriptive-introduction-of-vpn-with-its-types/