A switch stack is a set of up to nine Catalyst 3750, 3750-E, 3750-X switches connected through their StackWise ports, or up to four 2960-S switches connected through their FlexStack connectors. One of the switches controls the operation of the stack and is called the stack master. The stack master and the other switches in the stack are stack members. The stack members use the Cisco StackWise (or FlexStack) technology to behave and work together as a unified system. Layer 2 and Layer 3 protocols present the entire switch stack as a single entity to the network. The stack master is the single point of stack-wide management.
NOTE: Catalyst 3850 switches cannot be stacked with any other switch model and maximum stack size is 4. As with 3750X switches all members must be running the same feature set.

2. Ensure that the 3750-X switch is running the same IOS release (IOS 12.2(55)SE or later recommended) and has the same licence enabled as the existing stack members before it is added to the stack.

3. If the existing stack is running multiple IOS feature sets (e.g. IP Services on the master and standby and IP Base on the other members of the stack) then the stack will require to be upgraded so that all stack members are running the same feature-set. The 3750-X switch that is being added to the stack will also have to have the same licence to be enabled (IP Services in the example).

This section has been added for engineers to refer to as a quick reminder for installing new stacks:-
• It’s important to ensure that the switches are cabled up correctly, that all switches are running the same version of software and the same feature-set, and that any previous configuration has been cleared.
• The switches should then be powered on in order that they are stacked with the top switch first, then the second switch in the stack and so on. The top switch should then be used to configure the stack.
• Configure the stack master with a priority of 15, the backup master with a priority of 10 and the other switches with a priority on 1.

The following script configures the switches 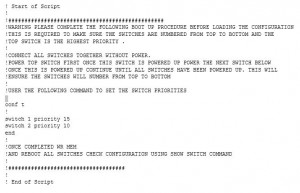 If you wish to use a Cisco Catalyst 3750G – 12S (12 SFP ports) as a switch Master please refer to the SDM Templates section in this document.
Each member in the stack must have the same IOS image and feature-set. Otherwise upgrades of software become difficult, and may result in a breach of license.

Switch Stacks should confirm to the following standards:

The Stack Master will be the top switch in a stack and will have a member number of 1. All remaining switches will be positioned underneath the Stack Master and will be numbered sequentially.

The following procedure should be used for configuring a stack:-

Do not connect switches to the network or to each other at this point.

2. Ensure that all switches have been cleared of any previous configuration (If switch is not new out of the box).

3. To prevent incompatible configurations, follow these steps on a previously configured switch that you plan to add to the stack:

4. Ensure all switches in the stack are powered off and connect the switches via StackWise cables. See the section below for detailed information on connecting the switches together.

5. Power the top switch first. Once this switch is powered up power the next switch below. Once this is powered up continue until all switches have been powered up. This will ensure the switches will be numbered incrementally from top to bottom.

6. Apply the configuration below to Switch 1 (Stack Master).

Confirm the configuration is saved and then reload the switch

Note: When you configure this feature, a warning message displays the consequences of your configuration: if the stack master is removed from the stack and re-used elsewhere in the network this will cause networking issues (duplicate MAC address) and could be difficult to fault find.

To check which MAC address is being used, and check if it’s persistent, you can use the show switch command

8. Check the status of Stack with the ‘show switch’ command. Other useful commands are : –

At this point the configuration can now be applied to the Stack Master.

This example shows how to provision a Catalyst 3750G-48PS switch with a stack member number of 2 for the stack. The show running-config command output shows the interfaces associated with the provisioned switch:

You can now view and configure the interfaces of the switch in the running configuration:-

Remove a Provisioned Switch from the Stack

If a switch stack runs Cisco IOS Release 12.2(20)SE or later and you remove a provisioned switch from the switch stack, the configuration associated with the removed stack member remains in the running configuration as provisioned information. In order to delete all configuration information associated with the removed switch (a stack member that has left the stack), apply the no switch provision command in global configuration mode.
In this example, switch number 2 was removed from a stack. The model number of the switch is WS-C3750-48TS:
no switch 2 provision ws-c3750-48ts
exit
!
write memory

Note: In order to avoid the receipt of an error message, you must remove the specified switch from the switch stack before you use the no form of this command to delete a provisioned configuration.

The output of a ‘show switch’ command is shown below 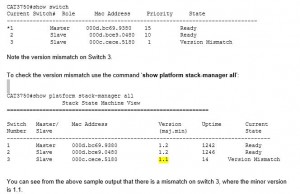 If there is a version mismatch and the master cannot update the SW it will not be possible to session across to the affected switch. The only way to update the SW is to power down the switch, disconnect it from the stack and to then manually update the IOS whilst offline. The interface configuration will still be present on the remaining stack, therefore ensure that when the switch is returned to the stack it has the correct switch number and priority.