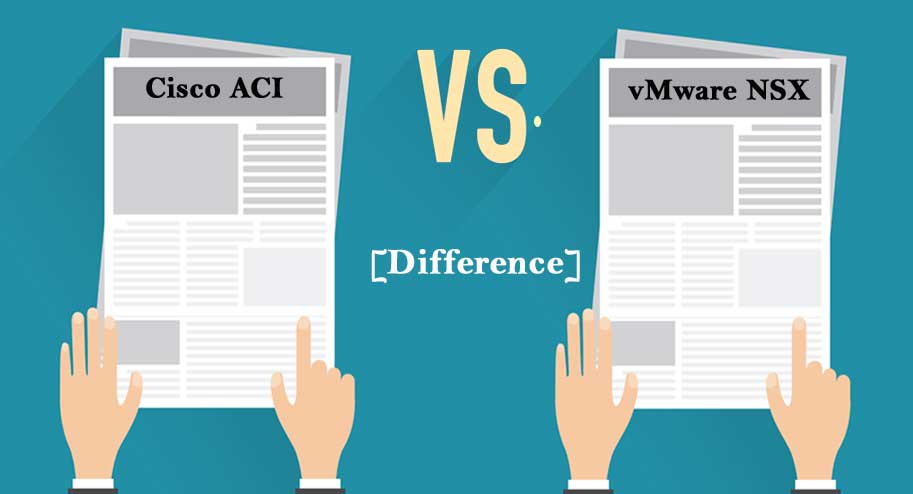 The internet is flooded with a lot of topics related to Cisco ACI and VMware NSX. However, it may be that you are not able to distinguish the differences between them. You may be wondering what’s make them different from. Let’s understand in this blog the Cisco ACI vs. VMware NSX to increase our knowledge about them.

Cisco ACI
Cisco Application Centre Infrastructure (Cisco ACI) is most widely adopted in SDN (Software Defined Networking) offering for data centre and cloud networks. It pioneered the introduction of intent-based networking in the data centre. It is a solution that came from Cisco. It builds on a leaf-and-spine fabric architecture with an (APIC that acts as the unifying point of policy and management. Cisco ACI fixes problem by offloading the management plane of network devices to a centralized.

Key benefits of Cisco ACI
Businesses are using Cisco ACI these days because of several benefits. Some of the key benefits of Cisco ACI are the following:
• It eases and speeds up the deployment of technology
• It gives you a single point to provision either via GUI or via REST API
• It ensures connectivity for physical and virtual workloads by ensuring complete visibility on virtual machine traffic
• It establishes hypervisors compatibility and integration without the requirement of any software to the hypervisor
• It is known for the simplicity of automation and network slicing
• Further Cisco ACI has the capability to create portable configuration templates
• It eliminates flowing from fabric and ensures hardware-based security
• It lets you experience the ease of mapping application architectures into the networking configuration
• Moreover, it enables you to insert and automate firewall, load balancers and other L4-7 services

VMware NSX
VMware NSX is virtual networking and security software. It is created from vCloudNetworking and Security (vCNS) and Nicira’s Network Virtualization Platform (NVP)the intellectual propertyof VMware. The VMware NSX comes with logical switches that use unique Virtual Extensible LAN (VXLAN) network identifiers in order for creating a logical overlay extension for the L2 network, to which applications and tenant virtual machines (VMs) can then be logically wired. Also, it performs routing with both logical distributed routers, which can further create routes between physical routers for scale-out routing with active-active failover and virtual networks at the hypervisor kernel.

Agility: The VMware NSX has been designed to limit the time of provisioning from weeks to seconds.

Cost: It is used to reduce both OpEx and CapEx with automation, which further leads to eliminating manual configuration. Also, VMware NSX can streamline network hardware requirements.

Choice: The VMware NSX can lead to operating any hypervisor, network hardware. It can integrate with any cloud management platform.

The VMware NSX is said to reduce application provisioning times down considerably, ranging from months to minutes. Its virtualization is also considered to improve data centre security by building security directly into the data centre infrastructure. With the VMware NSX in place, you can deploy advanced partner services for increasing protection and reducing risks.

Conclusion
Cisco ACI and VMware NSX have their roles in networking. They have their own importance. This is the reason many businesses tend to implement these technologies. With the implementation, they are able to secure their network. If you also want to manage networking services, then look for individuals have expertise in Cisco ACI and VMware NSX. Many networking engineers get training in these technologies and are able to deliver the best networking solutions to enterprises.