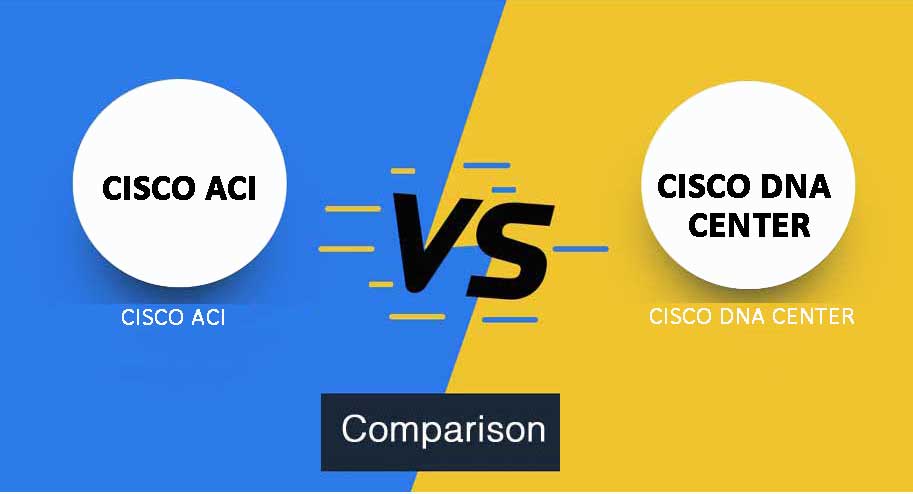 There is no as such similarity between both certifications but still people do have confusion regarding these two i.e Cisco ACI (Application Centric Infrastructure) and Cisco DNA (Digital Network Architecture). So, given below is an article comparing both the exams to make you clear about these two.

What is Cisco ACI?

Cisco Application Centric Infrastructure (ACI) has been the data center networking workhorse since its unharnessed in 2014. ACI was a substantial success in scalability, automation, and user experience.

ACI authorized admins to fine-tune automation in data centers large and small. ACI simplified DC networking by taking away the complexness of manually fixing up a network surrounding. Traditionally, various Nexus switches installed in the similar surrounding had to be organized manually — one by one. Since ACI treats all organized devices as a single entity, admins can configure and manage them all at the similar timing through the APIC. It’s an enormous time and money saver.

ACI started returning into its own from an automation point of view with it HTML5-based GUI — simplifying the entire setup process by shielding administrators from the often tedious task of configuring equipment through the CLI or the REST API. Integration is another huge profit that ACI brought to the table. ACI brought technologies such as networking, virtualization, container and orchestration together as simplifying network configurations, unified configuration.

ACI delivers this practically through an application-oriented platform. Instead of being bound to routing, trunks, VLANs, and subnets, ACI uses a leaf-spine-leaf topology (CLOS) that is both simple and scalable, making it easy to expand when required.

There is a lot more to this technology, however these are few of very basics for comparison..

What is Cisco DNA?

Cisco Digital Network Architecture (DNA) is an intent-based networking solution. Cisco DNA is just like ACI that permits network engineers to deploy new networks virtually and with a few simple clicks of the mouse it creates policies for the network. DNA takes it a step further. Think about the DNA Center as the centralized management and automation platform that controls the entire network via the enterprise version of APIC, called APIC-EM.

Rolling out new policies, deploying new networks, and supporting new applications that operate both locally, within the cloud, and across the WAN, can be configured in seconds from a single point. This creates a lot of organic network with less complexity for your support employees to worry about — and removes human error.

With application policy templates and simple preparation, Cisco DNA offers users all the simplicity and easy use of the ACI and conjointly permits for automated IWAN deployment and management. This takes away the requirement to configure any one single piece of Cisco equipment, as the system automates all this through Cisco DNA.

Companies come back time period because the network is sensible enough to understand the impact of changes created to the network. These refined systems alert network operators to potential problems as they arise and even take steps that address problems proactively.

Some difference between Cisco ACI and Cisco DNA

In effect, Cisco ACI permits your environment to deploy new networks virtually, alter application policies on the network, and gain bigger network visibility. The Cisco DNA Center takes these concepts a step further and builds upon the achievements of Cisco ACI. The DNA Center is a centralized management and automation platform for the whole network, and it is really powered by a new enterprise-scale version of the APIC referred to the APIC-EM.

Beyond the templated approach to application policy, the DNA Center can also automate IWAN management and deployment. Moreover to this , it can provide business insight from your Cisco wireless infrastructure with CMX Cloud. Using location and presence information, the DNA Center can deliver customer behavior data to the network administrators.

DNA Center is not everything, Though it is an important component of the Network, Intuitive., it. The Network, Intuitive. includes a variety of alternative powerful management and automation solutions for the network, for example Software-Defined Access. SD-Access is itself a tool that consists of other tools within it.

SD-Access provides an administrator with the DNA Center and each of it’s capabilities. From there, is additionally provides an Identity Services Engine which permits you to automate access and security policies across wired, VPN and wireless connections. Finally, SD-Access also contains an analytic platform for network monitoring and metrics.

To get instructor-led training: https://www.uninets.com/